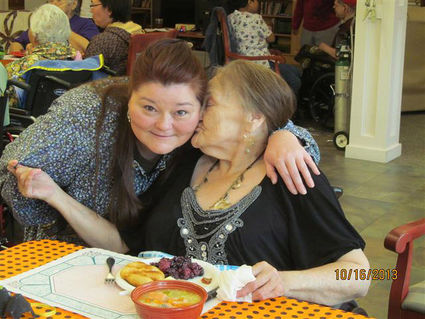 Providence Seward Mountain Haven (PSMH) is a long-term care facility tucked away in the trees on the side of a mountain in Seward. I had the opportunity to visit Alaska Native Elders living there on two recent occasions and prepare traditional lunches for them.

The staff purchased salmon, vegetables, berries and bread dough and we prepared the food on-site. I chopped vegetables for salmon soup, which included cubed salmon, carrots, celery, onions and rice with salt and a little bit of pepper. While the elders were eating the salmon soup, I heard them mention how the taste was just perfect – simple, without a lot of spices.

Some of the women helped form the dough for the fry bread and began telling stories of recipes they had used, talked about who the fastest dough former was in their families, and how they made Eskimo ice cream (akutaq) back home. This day, we used a mixer to whip the Crisco into a whipped cream consistency, then added sugar and water, and folded in the berries.

On the following visit, we made salmon soup, boiled salmon strips, fry bread and akutaq. Several staff asked for instructions so that they could make it in the future. We discussed how to use fish heads in soups and the importance of items like seal oil in the diet of Alaska Native people. They were intrigued about the ingredients and discussed the similarities between different cultures worldwide, such as Koreans using the same process for making fry bread but adding brown sugar in the center prior to frying. The elders again helped form the dough for fry bread and it soon became a race as they formed the dough faster than the staff.

Moments like these help us appreciate the opportunities we have to provide traditional Native foods, to learn from the elders, and to learn different ways of preparing food and its importance. We are grateful to the staff at Providence Seward Mountain Haven, who take such great care of their residents and help make each of our visits fun for the residents.