By Rindi White
For Senior Voice 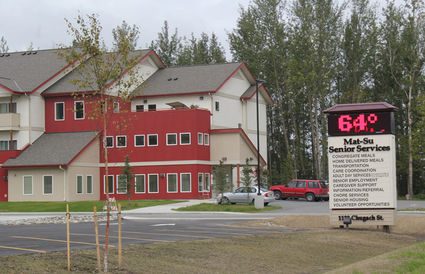 Mat-Su Senior Services, also known as the Palmer Senior Center, is one of six senior centers in the Mat-Su Valley looking for ways to pool resources so they can improve services.

The six senior centers in Mat-Su are exploring opportunities to minimize administrative costs and maximize available public and private resources to provide a wider variety of services to the seniors they serve.

The Coalition of Mat-Su Senior Centers serve a geographically broad area, with some centers serving more densely populated areas, such as in Wasilla and Palmer, which both have large senior living campuses, and others where the population is more spread out and fewer services are available, such as in Meadow Lakes, Willow and Upper Susitna. Mid-Valley Senior Center bridges the gap between large and small senior centers, serving congregate meals and offering other services on a small campus in Houston.

Each senior center reflects the unique needs and culture of its community. That's something people involved in the discussion say they don't want to change. But it might make sense for the centers to collaborate on some things, such as having a single accountant do taxes for all six nonprofit entities.

The discussion of consolidating some senior services and administrative functions in Mat-Su isn't new, says Rachel Greenberg, deputy director of Mat-Su Senior Services, or Palmer Senior Citizens Center. The Coalition of Mat-Su Senior Centers, a formal network of the six non-profit organizations that operate senior citizens centers or senior housing in Mat-Su, has been meeting since 2006.

"We identified way back then that we had a growing senior population and we needed to do something," she says. "Mat-Su Health Foundation approached the coalition and offered to help identify what really needed to happen."

The coalition partnered with the Mat-Su Health Foundation, Alaska Mental Health Trust Authority, United Way of Mat-Su, the Rasmuson Foundation and others to help develop a plan for senior services in the Mat-Su. The plan, which was printed in 2011, showed there were areas where senior center services overlapped, and it also showed some inefficiencies, Greenberg says. So the coalition, this year, began seeking a contractor who could help the group come up with a model for consolidation that could be implemented over five years.

The coalition has a four-pronged goal: to reduce administrative and operating costs in order to provide more services to more seniors; to expand services to all seniors in the Mat-Su; to increase and improve senior services; and to create opportunities to provide employee benefits, especially healthcare and retirement benefits, Greenberg stated in a presentation she and Herman Thompson with Upper Susitna Seniors, Inc. gave in August to Alaska legislators and funders at a Mat-Su Senior Forum.

To that end, and through a contract with Mat-Su Health Foundation, the Coalition created a smaller group, the Regional Senior Services Oversight Committee, with one representative from each of the six senior organizations. The committee was created to map out specific alternatives for collaboration, coordination and possible consolidation. It hired the Rider Group, a team of five Anchorage-based consultants who have extensive experience in the health care and senior services fields.

"They have worked together before and they have the expertise to do not only the service component, but the administrative and business component," says Sharon Scott, program officer with the Mat-Su Health Foundation.

The Rider Group visited each of the six senior centers in July and August, making comprehensive organizational assessments of each center and identifying areas of duplication of services or inefficiencies. With that information in hand, the team will draw up alternatives for the regional committee to consider.

"The hope is that we will have five business models to look at and review by January 10 or so. From there ... the Regional Senior Services Oversight Committee is looking at making a recommendation to the coalition, and from there, it needs to go to the boards of each of the senior centers, so everyone is on board," Greenberg says.

Herman Thompson, the vice-chair of the regional committee, says he expects the final list of suggestions to take a menu-like approach.

"Each individual organization is going to be able to select off that menu of services what makes sense for them," he says.

Lisa Byrd, site manager at Mid-Valley Senior Center, says her group is looking forward to the opportunities consolidation might offer. Transportation is an area she'd like to see improvement, she said. Mid-Valley currently has one van, which delivers seniors to the Adult Day Services in Big Lake, but she'd like to offer more.

"I'd like to set something up so we could go to Big Lake once or twice a week, to the library or the grocery store," she says.

Of the consolidation effort, Byrd says she sees it as a very positive effort and is eager to see the final plan.

Thompson is a board member of Upper Susitna Seniors, Inc., and says there are some areas in which consolidation would make sense for that group. For example, if a senior citizen needed to find housing at one of the six senior housing locations in Mat-Su, he or she would currently have to submit six different applications; one to each of the senior centers, and the application would have to be reviewed by each center.

"Having a housing referral office, a central one where somebody could submit a single application that fit all of them, instead of having to go to six different places and submit six different applications (would make sense)," Thompson says.

Hiring a certified public accountant, or CPA, to do taxes for all of the organizations might also make sense for Upper Susitna, he says.

But there are other programs that his group wouldn't change, he says.

"We're out in the hinterlands and, philosophically, this group wanted to stay away from taking monies from organizations that tell us we have to do things this way or that way. So we haven't taken part in National Transportation funding or meal plans where we would have to hire a dietician to do our meal plans," he says.

Instead, Upper Susitna has collaborated with restaurants in the area to provide a low-cost meals-on-wheels alternative. On Tuesdays, the organization provides a meal cooked in the Upper Susitna Seniors kitchen, and three days a week, meals are delivered to between 17 and 22 peoples' homes throughout the area, as far north as Trapper Creek, Thompson says.

"It's not just for seniors. We have people in our community who maybe bust a leg or are laid up and we'll deliver a meal for them," he says.

The program runs on donations and local grants, he says, and it's pretty popular. It's a benefit for area restaurants, too, he says, because it gives them a monetary boost during the off-season. The setup is well liked and it works, so that's one area Upper Susitna Seniors will not be changing as part of the collaboration.

Meadow Lakes Seniors, Inc., is similar, in that it doesn't plan to take part in any meal provision efforts, says volunteer president Sherri Rusher. She said her group is more interested in the administrative offerings that might appear on the menu – perhaps better insurance rates and better bookkeeping and auditing, she says.

Meadow Lakes works closely with the Meadow Lakes Community Council, and in fact has council space at its senior center. She said the community and senior center are considering building a community center where meals might be available to both residents and seniors, but for now, seniors in Meadow Lakes are able to drive either six miles to Wasilla or six miles to Houston to take part in Wasilla Area Seniors Inc.'s meal program or the meals offered at Mid-Valley Seniors.

Rusher says she is anxious to see the menu plan, and is looking forward to a discussion among her local board to sort out which options fit best.

"It's going to be a challenge to us, when that menu comes out, to say 'Hey, what's the best thing for Meadow Lakes down the road?'" she says.

Greenberg, in the August presentation to funders and legislators, said working through the sticking points – the areas each senior center wants to hold on to, rather than collaborate on – has sometimes been difficult.

"Throughout the history of the coalition, there has been real discord and division. Additionally, the turnover in leadership has contributed to setbacks, modifications and reevaluation. The idea is to learn from it and move forward in a positive manner," she says.

While the Regional Senior Services Oversight Committee meets privately to discuss specific details of the regionalization plan, the Coalition of Mat-Su Senior Centers meets monthly and those meetings are open to the public. The meeting location changes monthly – the group rotates its meeting location between the six senior centers. Meeting times and locations are available at each of the senior centers, Greenberg says.