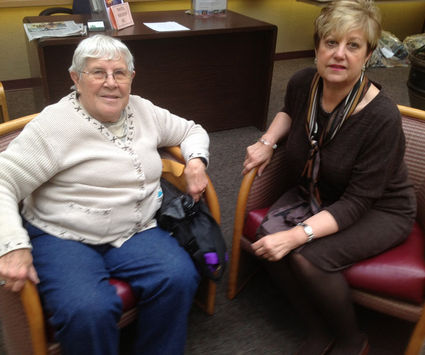 Becky Parker, right, new General Manager of Anchorage Senior Activity Center, visits with center member Joan Jones. "I was a nurse downtown during the '64 earthquake," Joan says. "Everyone here has such interesting stories," Becky responds. "I think you should tell your story in the memoir writing class."

Eyes popping in surprise, Rebecca Parker proclaims, "Yes. It's true. I have been in Anchorage for 41 years!"

Becky and I have known each other for most of those 41 years. We'd met long ago as members of Alaska Press Women, now called Alaska Professional Communicators. I am sitting with her in her new office setting at the Anchorage Senior Activity Center, where she has recently been named General Manager. Feeling like old friends who hadn't had a chance to visit in several years, we realized there was some catching up to do before we began to talk about her new position.

"Anchorage is home," Becky states easily. "I came here directly out of college at Oregon State University. I'm one of a flock of people I know who came here as a trial run, the 'I'll give it two years' group."

I nodded, identifying with this.

"I wasn't sure about the move," she continued. "Alaska seemed so far away from Oregon." We are both amused by this feeling we shared several decades ago.

I've caught Becky just four days into this new position, but she says she is already feeling comfortable in the new role.

"People are already calling me Becky, not Rebecca," she tells me.

"It was an unanticipated career change," she admits. "I'd been working in development at the Blood Bank of Alaska most recently, when several people mentioned this position opening at the senior center. I was told the search committee was looking for someone connected to the community, someone who could make links with community leaders and assist the center in being more visible."

That would make the position seem tailor-made for Becky. Her list of professional links goes on and on: Stakeholder Relations Manager for Alyeska Pipeline Service Company; Special Assistant to the Commissioner of Health and Social Services for the State of Alaska; and President of the Providence Alaska Foundation. Her Anchorage work experience covers 20 years in Public Affairs with ARCO Alaska, including overseeing the ARCO Foundation.

Becky brings with her years of service on many community boards as well – Alaska Public Media, Catholic Social Services, Anchorage Opera – and she's past president of the Anchorage Downtown Rotary Club and the Imaginarium. Adding to her credentials are awards such as being named one of the YWCA Women of Achievement, Anchorage School District Volunteer of the Year and Oregon State University Alumni Fellow.

I would add simply that she makes a fine friend. Although so new on this job, she's already been moving about the senior center, making friends.

"There's so much going on here, such interesting people, real people with stories to tell. I just visited with one man who moved to Anchorage after losing his wife, was lonely, so went to one of our socials – and met his future wife. I think the most important word in our center's name is "activity" – Anchorage Senior Activity Center."

She takes a moment to list some of the activities that she's already observed.

"There's quilting, chorus, art classes, memoir writing, dances, discussion groups, computer classes, a restaurant, catering, a ballroom, a wonderfully equipped fitness center. It amazes me. I recently visited a senior center in Northeast Portland. It was fine, but we shine in comparison."

Becky knows with all those new friends to make, it will be difficult to simply sit at her desk.

"When a group of 50 to 70 people was here for a social hour the other day, they all came to greet me. That was so welcoming, so kind! There was music and some dancing. A gentleman approached me. 'Let's dance!' And off we went. There's so much going on here, so much good fun. A focus of our mission is to promote healthy lifestyles. I see that going on all around me."

It is obvious from the center's October calendar that Becky will need to get her feet on the ground quickly. A Members First Campaign is beginning that month, stressing the benefits of ASAC membership. There are currently 2,300 members from all over the community, according to Becky, and the center wants to be sure that members receive the benefits allotted to them – such as the fitness classes and use of fitness equipment, the computer lab, the library and art activities in the craft room. There will be the big book sale on October 3, 4 and 5. The annual membership meeting is scheduled for October 7, with the opportunity to meet the new board of directors. Will there be a Halloween or fall celebration?

"We celebrate everything there is to celebrate!" Becky says.

There are major improvements to the center that need to be addressed now.

"The center was part of the Project '80s developments," Becky says. "It is now 31 years old. We have requests to the mayor's office for budgeting to assist with safety and security improvements, building improvements and plant and equipment improvements. Our total capital budget request is $3,045,000."

As we are ending our visit on this major note, Becky stops in the lobby to talk with a member seated there.

"Hi Joan," Becky says, remembering her name. I ask Joan how long she's been member. "Just a week or two," she tells me, "but I've already discovered it's like a little, friendly city, a busy one."

Both Becky and Joan are new to this place full of activity, but it seems apparent that both belong.