News on colds; anti-cancer qualities of plums; and high-tech walkers 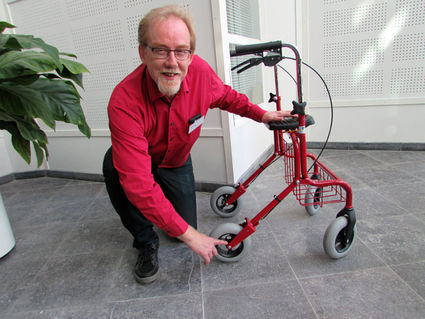 Senior scientist Olli Kuusisto presents the first sensors that have been retrofitted on a rollator.

Lowering your risk of catching a cold

The common cold occurs approximately two to three times a year in adults. If you get that many, you are in the norm. However, if you get more than that you need to think about getting more sleep. New research suggests that a lack of sleep and walking around with a sleep deficit can significantly increase your risk of catching a cold.

Studies also suggest that handwashing and zinc may help with prevention. A review of 67 randomized controlled trials found that handwashing, a traditional public health approach, may be effective. It is theorized that many older adults get infected when they come into contact with school aged children. At least two randomized controlled trials indicated that children who took 10 or 15 mg of zinc sulfate daily had lower rates of colds and fewer absences from school due to colds. The data suggest that zinc may also work for adults.

Honey has been found to have a slight effect in relieving cough symptoms. However, the studies with vitamin C have been mixed and there is little evidence to support taking large quantities of vitamin C.

Most colds are caused by viruses, with only about 5 percent of clinically diagnosed colds having a bacterial infection. Yet, antibiotics are sometimes used inappropriately for viral infections. Studies show that antibiotics show no benefit and misused antibiotics can have associated harms.

Researchers at the Technical Research Centre of Finland report they are now marrying computer technology with the traditional walker to come up with a safer and more effective walking tool. The researchers have developed a smart walker prototype that supports independent living among the elderly by making the traditional walker smart. They have retrofitted it with sensors and digital software that analyze the user's physical condition and daily activities. This allows the device to collect useful information on a user's daily rhythm, walking distances, duration and speed of walking. The smart walker also measures hand grip strength. This type of information can then be used to monitor wellbeing and physical condition.

"Other features can also be developed, such as monitoring of motoric state or fall alarm. The measured data can be compared to the user's own goals and those of a reference group or a friend. Emerging trends can be monitored on a daily, weekly, monthly or yearly basis," said senior scientist Olli Kuusisto, who is with the Technical Research Centre of Finland.

It is possible to have the information forwarded to other people, such as family members or care personnel. The researcher's IoT (Internet of Things) expertise enables the installation of intelligent features on any device or space. Separate IoT solutions are already available off-the-shelf, but the greatest benefits lie in connecting solutions to the IoT network and using big data analyses to find out relevant information from a multi-source data flow.

The basic assumption is that sensors will not have a major impact on the price of the end product. No word yet on how much the smart walkers will cost and when they will be available in Alaska.

Eating plums may pack a hidden anti-cancer punch. Researchers from Texas A&M University and the University of North Carolina have shown a diet containing dried plums can positively affect microbiota (gut bacteria) throughout the colon, helping reduce the risk of colon cancer.

According to the American Cancer Society, colon cancer is the third leading cause of cancer-related deaths in the U.S. During 2015, colon cancer is expected to cause about 49,700 deaths nationwide.

"Through our research, we were able to show that dried plums promote retention of beneficial bacteria throughout the colon, and by doing so they may reduce the risk of colon cancer," said Dr. Nancy Turner, a professor in the nutrition and food science department of Texas A&M University.

A large body of research has already shown that one's diet can alter the metabolism and composition of colon microbiota, which has major implications for disease prevention and treatment.