Shiitake is treasured for good reason 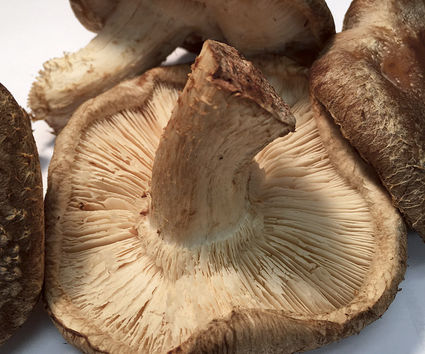 You don't have to buy them dried: hearty shiitake mushrooms can be purchased in local farmers markets and grocery stores across the U.S.

Shiitake (shih-TAH-kee), used medicinally by the Chinese for more than 6,000 years, is a symbol of longevity in Asia for its health-promoting properties. Ancient Egyptians treasured mushrooms as the sons of gods, sent to earth riding thunderbolts. Medieval English lore claimed mushrooms were umbrellas for the leprechauns and had to be gathered under the full moon.

A current adage holds: How they are commercially grown is similar to working for a large corporation – they keep you in the dark and keep slinging manure at you.

Fundamentally, shiitakes are a decomposing fungus. Also called Chinese black forest mushrooms, "shiitake" means mushrooms from the Shii tree, since shiitake were originally cultivated on the Japanese evergreen oak called Shii. So, if you want to appear erudite, politely remind someone when he or she calls them shiitake mushrooms that it is redundant.

For thousands of years, shiitake has been coveted as the finest edible mushroom in Asia. America's taste buds have caught on to this healing nutritional fungus' rich, smoky flavor, even though many associate funguses with something unpleasantly itchy, requiring a salvo of salve.

Exotic, hearty shiitake can be purchased in local farmers markets and grocery stores across the U.S. Consciously or unconsciously, most everyone has eaten one. Those dark brown slivers in Chinese carry-out? That's what we're discussing. Or, those aesthetically deprived, dried, unappetizing forms at the supermarket.

The mushrooming popularity of this tasty fungus is partially due to the distinctive, woodsy flavor and firm, meaty texture of oak mushrooms, which make them a delectable addition to any recipe. Combine them with mushroom soy sauce procured from your local Asian grocery for an addictive, deep earthy mushroom flavor. Shiitakes have significantly more flavor than the standard button mushroom.

Mushrooms are erroneously assumed to possess no significant nutrition. Au contraire. For thousands of years, the Chinese believed shiitake dispelled hunger, treated colds and nourished the circulatory system and have employed shiitakes as the mainstay of their medicine.

Mushroom experts at Garuda International Inc. share that, "Shiitake and other mushrooms have no green pigments (chlorophyll), they cannot make food from sunlight as do other plants but must live by eating plants or animals. Shiitakes' favorite entree is a dead, hardwood tree."

Garuda continues, "It is the shiitake's medicinal possibilities that are getting worldwide attention. Science has isolated substances from shiitake that may play a role in the cure and prevention of modern civilization's dreaded illness of heart disease, cancer, viruses, bacteria and AIDS. The therapeutic mushroom also promotes strong immune function, reduces inflammation, combats allergies, helps balance sugar levels and supports our temple's detoxification mechanisms. At the least: good food. At the most: brilliant medicine from God's celestial apothecary."

Wash any mushroom genus with care; remove the inedible stem and dirt, and then sliver them rather thinly with a chef's knife. When purchasing dried versions, reconstitute them in hot water, vegetable or meat stock or wine.

Shiitakes are a perfect pairing for beans and grain dishes, stir-fries, pasta entrées, or sauces for fish and chicken. Toss them into an omelet or your next batch of homemade soup. When purchasing fresh shiitakes, select ones with firm, spongy caps and small stems.

Unless your fridge needs Freon, shiitakes will survive about 14 days when kept around 36 to 40 degrees. Store the fungus in a brown paper bag rather than plastic. Oxygen-deprived air within the plastic bag turns them slimy. You might take this opportunity to check the temperature of your refrigerator. You could be making your family sick by allowing food to get funky in a too warm refrigerator.

As with most food, cooking releases flavor, so sauté these precious delicacies over medium-low heat in extra virgin olive oil, unrefined coconut oil or un-hydrogenated peanut oil. You can steam them in scant amount of liquid in a tightly covered pan for 15 minutes.

Dr. Andrew Weil advises, "Cook your mushrooms. Raw mushrooms contain small amounts of toxins, including some compounds that are considered carcinogens. These are destroyed by cooking them thoroughly. Broiling or grilling is best."

There's no sound reason, other than allergies or mold or fungus sensitivity, not to add the noble shiitake to your culinary repertoire.

Mushrooms are for everyone. Taste, savor and then benefit from the ambrosial, earthy, magical mystery and healing powers of the ancient, asexual shiitake mushroom from Gaia's celestial apothecary.