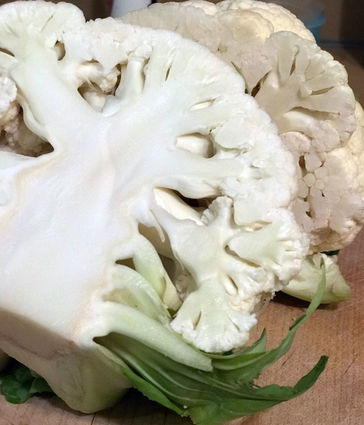 I was eating dinner with my husband Sam and having homemade chicken soup with a slice of sourdough bread and melted butter. It was simple and delicious. We ate silently. Toward the end of the meal, he said, "We always eat our soup and bread silently because we are mentally calculating how to time the last bite so it's perfect."

So true. We usually chatter during meals, and tell funny stories, but when soup and bread hit the table, it all goes to silence. I like to time my last bite so it's soup (to wash down the bread).

Tonight we made it differently with peas instead of celery (because you need something green) and with red onions instead of white ones. We used shredded cauliflower instead of rice - that was the biggest and most pleasant surprise because I didn't think it would actually work.

You can buy shredded cauliflower now in bags, in the produce department of your grocery store. Someone should have bagged this stuff decades ago!

The cauliflower holds up remarkably well, even days later. It acts just like rice except with cauliflower you get the most incredible health benefits. It's a crucifer, like its green cousins broccoli and Brussels sprouts, so it has the same cancer-fighting properties. I want you to start cooking with cauliflower. Here's why:

Cauliflower contains sulforaphanes, the compound that gives it a funky sulfur smell. This compound has been isolated and studied. It clearly demonstrates cancer-fighting promise, especially for breast, prostate and other reproductive cancers. This has been shown repeatedly, in both animal models and test tube studies.

Cauliflower contains antioxidants which neutralize free radicals. There are many, but among the more recognizable, we find quercetin, vitamin K, vitamin C, beta-carotene and kaempferol. That last one is incredible, it's rarely talked about but kaempferol has evidence behind it to show that it can block vascular endothelial growth factor (VEGF) production in your body and "suppress ovarian cancer cell metastasis in vitro" according to one research study. Another article suggests kaempferol could interact with estrogen receptors on the cell and slow growth of cancer.

Cauliflower protects your bones because it is a rich, natural source of vitamin K and C, as well as minerals like potassium, manganese and phosphorus.

Cauliflower gives you a low-carb alternative to digestible fiber so it will help you achieve regular bowel movements, while eliminating toxins stuck in the deep crevices of your gut. In fact, sulforaphanes and glucosinolates found in cauliflower fight Helicobacter pylori, and that fact alone should reduce your risk of colon cancer.

Cauliflower contains I3C (Indole 3 Carbinol) which helps metabolize estrogen into anti-cancer byproducts, and that's good for both men and women. I3C has been studied for its role in cholesterol and triglyceride synthesis.