New Congress has an ambitious health care agenda, but can they accomplish anything? 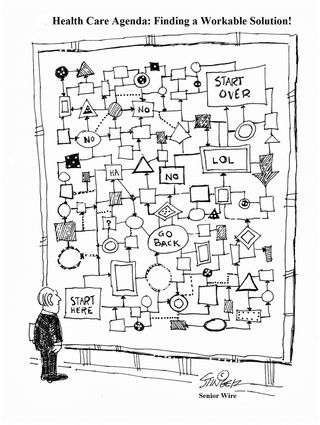 When the next Congress begins its work in January, lawmakers from both parties will try to work with the Trump administration to pass vital health care legislation. But getting a political advantage and maneuvering for the 2020 elections will help determine just how much cooperation can be found.

Democrats and Republicans have significantly different political agendas they want to advance. The easiest issue on the health care agenda should be making sure people with pre-existing conditions do not lose that coverage. But even though both Democrats and

Republicans overwhelmingly support it, it will be far from an easy fix. A little history helps understand the complexity of the issue.

Since its approval in March 2010, Republicans lawmakers have tried to repeal, modify or otherwise curb the Affordable Care Act (ACA) more than 70 times. But with the Democrats taking control of the House of Representatives in January, repeal legislation would appear to be dead.

But that doesn't mean efforts to kill what used to be called Obamacare, are over. Senate Majority Leader Mitch McConnell, R-Ky., has acknowledged a repeal effort in the Senate would fall short in the House. But the real action is in a Texas courtroom,

where a lawsuit filed by the Trump administration is moving through the courts. It seeks to eliminate the ACA's guarantee that any American with a health problem that exists before someone gets health insurance coverage does not result in issues of denied coverage.

Twenty Republican-controlled states have sued in federal court, arguing that all of the ACA's requirements are unconstitutional without the individual mandate. The Trump administration has given its support to that lawsuit, instead of defending the ACA. If that lawsuit succeeds, the ACA and the protection of pre-existing conditions will die. With absolute certainty, a bipartisan coalition would respond swiftly with a legislative remedy if that happens.

A federal judge in Texas recently struck down all of the Affordable Care Act in response to the Texas lawsuit from 20 state Attorneys General. The ruling, if it stands, would not only eliminate coverage with protections for people with pre-existing health conditions, but also wipes out the guarantee for coverage for what the law deems "essential health benefits" – things like emergency services, mental health, substance abuse, newborn, maternity and pediatric care, and prescription drugs.

But the ruling is so sweeping that many legal analysts believe it is likely to be overturned. The U.S. Supreme Court, in a 5-4 decision, has already upheld the ACA's legality. Democrats' reaction was to pledge immediate action upon taking over the House of Representatives in January. Republicans also campaigned this fall on the promise of continuing protections for pre-existing medical conditions. But the Texas ruling shows the benefits and perhaps also drawbacks of President Trump's and congressional Republicans' long-running effort to remake the judiciary through the confirmation of dozens of conservative judges.

If it is upheld on appeal, the decision could strip an estimated 17 million Americans of their health insurance – including the millions who gained coverage through the law's expansion of Medicaid. Millions of others could see premiums skyrocket as price protections for pre-existing conditions lapse.

Serious medical conditions like cancer, diabetes, heart disease, HIV/AIDS and asthma are often the kinds of illnesses that some health insurance companies try to avoid covering. More than 25 percent of Americans under age 65 – about 52 million people – have a pre-existing condition that would have prevented them from buying individual health insurance before the ACA became law in 2010. More than 75 percent of Americans, polls show, favor keeping these protections in place.

Before Obamacare became the law, insurers routinely denied coverage to sick people who tried to get new coverage. A 2010 study found that 36 percent of adults who tried to buy an individual plan over the previous three years were rejected, charged a higher price, or had certain treatments excluded. That prompted 35 states to organize "high risk" insurance pools to help cover people who were otherwise uninsurable. But many of these plans charged premiums of up to 200 percent of the average market rate and also had higher deductibles and offered fewer benefits.

The ACA fixed this by making it financially possible for health insurance companies to insure everyone, by providing insurers with enough healthy customers to subsidize the sick ones.

Trump and Republicans in Congress have succeeded in dramatically rolling back parts of the ACA, with the 2017 tax cut bill eliminating the individual mandate. But what the Republicans never did was find a workable replacement.

House Democrats have pledged to use their new majority to push legislation protecting pre-existing conditions immediately after taking control in January.

Democratic control of the House will dramatically change the political dynamic in Washington because of how they will use Congressional oversight and investigations to throw a spotlight on government malfeasance and corruption – something the Republican-controlled House simply didn't bother to do.

As Republicans retained control of the Senate, Sen. Charles Grassley, R-Iowa, plans to take over the Senate Finance Committee, which he chaired from 2003 to 2006. In the past, Grassley has worked across the aisle with Democratic ranking member Ron Wyden, D-Ore., in efforts to rein in prescription drug prices. Grassley will focus on a few ideas he's long pushed like drug re-importation and cracking down on "pay for delay" patent settlements, where brand-name drug companies pay generic drug makers to stay off the market for a period of time.

Grassley is also planning to examine the huge implications of recent mergers in the pharmaceutical supply chain that unite pharmacy benefit managers (PBMs) and insurers, including Cigna's merger with Express Scripts, and CVS combining with Aetna. These mergers would result in just four entities controlling 71 percent of Medicare Part D enrollees and 86 percent of standalone-drug plans.

President Trump, Senate Republicans and House Democrats all suggest they are open to drug-price legislation. But this is one of those issues where talking about it and doing something about it are very different things.

While the Trump administration's rhetoric on price restraint has been tough, its actions to date have not. In fact, it's been just the opposite.

The 2017 Trump-pushed tax bill gave the biggest windfall to the drug industry. The corporate tax cuts enacted last year have been estimated to deliver more than $6 billion to five of the top pharmaceutical companies in 2018. In addition, the tax on profits held outside of the U.S. and repatriated back to the U.S. was also cut - a boon for big multinational drug companies.

Finding a workable solution to skyrocketing drug prices is where the issue really gets sticky. On this issue and the discussion of Medicare for All – the real purpose of most drug pricing legislation in the new Congress will be to set an agenda for the 2020 presidential elections, more than to actually fix the problem.

Under Trump's latest plan, Medicare would reduce payments for certain high-cost drugs used for cancer, multiple sclerosis and autoimmune disorders, by using the average of prices in other advanced industrial countries as a benchmark in deciding what Medicare should pay. Many Democrats have praised this idea. Not surprisingly, the powerful drug lobby doesn't like this at all.

Another idea floated by Trump that Democrats also like would require drug manufacturers to include the list prices of drugs in television advertising. But consumer advocates worry list prices would confuse consumers who often pay less than the full list price.

Democrats suggest changing the law to allow Medicare to negotiate for volume drug price discounts for its recipients. Rep. Lloyd Doggett, D-Tex., is pushing the idea to require HHS to negotiate prices for drugs covered by the Medicare Part D program, using the clout of more than 56 million beneficiary subscribers to work better deals than the government currently gets. By law, Congress has forbidden Medicare from negotiating drug prices, even though Medicaid, the U.S. military, and the Veterans Administration all negotiate reduced price deals.

One big problem for Democrats is that the Congressional Budget Office doesn't think Medicare negotiations would save any money – unless the government is willing to deny seniors coverage for certain medications. That could open Democrats up to political attacks for depriving older people of the medications they need.

Other options, including changing the patent protections that pharma companies receive for new drugs, addressing the tax treatment of drug research and development, and perhaps addressing the mystery over pharmacy benefit managers – the middlemen between health insurers and drug makers. But none of these are silver bullets solutions. If this was an easy problem to solve, lawmakers would have found an answer long ago.

Another area where there is some agreement is over a proposal called the Creates Act, requiring manufacturers of brand-name drugs to make samples available to generic drug companies trying to develop inexpensive copies of those medicines.

Some Democrats are also pushing for the creation of a "price-gouging" enforcer, which would be a Senate-confirmed position to lead a new agency focused on stopping significant price increases for prescription drugs. But it's unclear where Senate Republicans or the Trump administration comes down on this idea.

But all of these ideas are certain to run into major resistance from drug companies, and doctors, hospitals and some patient advocacy groups that will all have differing takes on these ideas. It has been visceral opposition that has doomed prior administrations' attempt to control Medicare payments.