Congressional lawmakers find themselves caught between the unlikely and the impossible as they try and work through complicated issues like drug price controls. With the sharp partisan divide, the ongoing impeachment of President Trump, the upcoming presidential campaign and their own re-election fights on everyone's minds, difficult choices with disappointing results are the most likely scenario for prescription drug and most other major health care legislation affecting seniors – just like it was last year.

While health care remains a top agenda item according to most political polls, prospects of finding solutions to these issues on Capitol Hill remain elusive and increasingly difficult. 2019 opened with bipartisan talk of cracking down on drug prices and surprise medical bills. But it ended without major legislation passing on either front. This year seems destined for a repeat, despite rhetorical consensus that something needs to be done on both issues and middle-ground solutions obvious and available if partisan gunslingers could just put their weapons down long enough.

While few may have noticed through the partisan clouds that surround the nation's capital, the Democratic-controlled House of Representatives passed 433 bills in 2019, according to the Democratic Policy Committee, which tracks Congressional legislation. Of that number, 169 of them passed by voice vote; those included such commemorative bills as the renaming of post offices in Indiana and Pennsylvania and a wildlife refuge in New York.

Of those with recorded votes, many truly were bipartisan, but the definition of bipartisan was a loose one: that at least one Republican joined a Democratic majority. While some legislation actually got signed into law, according to FactCheck.org, a non-partisan fact-checking organization, the accurate number of bills "stuck" awaiting action in the U.S. Senate is 332 bills.

High prescription drug costs have become a rare bipartisan issue, with health care a top concern for voters ahead of the 2020 elections. President Trump has strongly pushed for sweeping reforms, even if most of his actions so far have been more symbolic than substantive. Everyone understands one thing – lawmakers must do something to satisfy a growing anger among consumers and avoid the awful optics of doing nothing at all and then facing the voters in November.

At the end of last year, after months of wrangling, House Democrats passed a sweeping bill pulled together by House Speaker Nancy Pelosi, D-Calif., aimed at lowering drug prices, by allowing the government to negotiate drug costs, something Congress expressly forbid in 2003 when it set up Medicare Part D, providing drug coverage to seniors. But that too is being held hostage by Senate Majority Leader Mitch McConnell, R-Ky., who controls what the Senate votes on.

The Kentucky Republican, who himself is up for re-election on the November ballot, understands that Republicans must do something, but he remains divided with his members over what they should do. McConnell is not eager to put up anything that doesn't have a minimum of half of his 53-member Republican majority – especially one that could incur the wrath of the well-financed pharmaceutical industry. McConnell has been warning colleagues privately that any drug pricing bill could result in a circular firing squad, exposing his Republicans to tough attacks as they run for re-election.

The Senate's primary vehicle to lower drug fees is a bipartisan one from Sen. Finance Committee Chairman Charles Grassley, R-Iowa and Oregon Democratic Sen. Ron Wyden, which would cap drug price increases in Medicare at the rate of inflation. Even though a significant number of GOP senators say it's a bold stroke with crucial presidential support, many Republicans liken the move to price controls that would kill innovation, something they have long abhorred.

Grassley's prescription bill could seemingly be fixed for conservatives by removing the inflation caps language, but doing that would crater Democratic support and turn it into a partisan exercise. The ultimate middle ground will be some combination of the Grassley-Wyden bill merged with the House-passed Pelosi bill.

The wily House Speaker does control one wild card which she may use to try and push drug pricing legislation through, and around McConnell's objections. In December, to avoid the government running out of money, lawmakers passed a huge spending agreement, which included a health care package to authorize and fund expiring health care programs through May 22, 2020. The health care package that was approved included repealing three major health taxes, raising the federal age to purchase tobacco – an attempt to fix the vaping crisis – efforts to delay hospital cuts and the extension of several key Medicare programs including funding outreach and assistance for supporting low-income Medicare beneficiaries seeking insurance coverage.

When those programs expire in May, Congress will again need to identify policies that will pay for a longer-term extension of these health programs, which include community health center funding. It is this "must pass" legislation that Pelosi may try and use to force the Senate to approve both drug pricing and surprise billing legislation.

The legislation addressing surprise billing – the often exorbitant medical bills that come when patients don't realize they've been seen by a provider outside their insurance network – has bipartisan consensus to find a way to fix the problem, but no one seems to be able to get an agreement on how exactly to do it and get the legislation through both the House and Senate.

Most of the surprising billing problems seem to come when patients have to go to the emergency room and then later find out that one or more of their doctors happens to be outside their in-coverage insurance network. At the start of 2019, this looked like the easiest bipartisan health care measure bill that would move through Congress. What people forgot is how powerful the medical and health lobbying interests are in Washington. Both the House and Senate bills quickly got sidetracked and delayed into 2020.

Now, there's renewed activity in both the House and Senate on surprise medical bills. Two committees, the Senate Health, Education Labor and Pensions Committee (HELP) and the House Energy and Commerce Committee, have been working on plans. But in the House, several committees share jurisdiction and have different ideas of how the legislation should be written. The main point of contention is a dispute over how to figure out the amount an insurer will pay the doctor once the patient is protected from surprise bills.

Ways and Means wants to give that decision to an outside arbiter, while the Energy and Commerce version – and also the Senate HELP Committee legislation – would set the payment rate based on the average payment in that geographic area, with the option to go to arbitration on some higher cost medical bills. Not surprisingly, lobbyists are putting lots of money into this battle – especially powerful doctor and hospital groups who worry the legislation could lead to damaging cuts to their payments. In addition to huge political contributions to committee members, doctor and hospital groups are waging million-dollar public ad campaigns against the proposals.

What went largely unnoticed in the huge spending bill Congress approved, before it went home for its December recess, was how successful the pharmaceutical companies, insurance companies, hospitals and medical device manufacturers were in that bill. They practically ran the table in Congress, winning hundreds of billions of dollars in tax breaks and other gifts through old-fashioned lobbying. Those health and drug industry successes prompted former Obama administration Medicare chief Andy Slavitt, to call it the "no special interest left behind bill" of 2019.

This bounty was contained in the measure that was signed into law as part of a $1.4 trillion spending package to keep the government from shutting down. Also contained in that legislation were victories to the drug industry in the form of repealing taxes that were central to the 2010 Affordable Care Act. Under pressure, even House Speaker Pelosi, one of that law's architects, agreed to go along.

Pharmaceutical firms also won extended protections for select patents, when lawmakers added 17 words to page 1,503 of a bill that critics suggest could amount to billions more in profits for that industry.

The taxes have been largely postponed by Congress since they were created a decade ago as part of Obamacare, but they were never fully removed, in part because of the large impact such a change would have on the budget deficit. Repealing them is projected to cut tax revenue by about $375 billion over the next 10 years.

The Cadillac tax was always an unpopular and controversial part of the 2010 health law, because the expectation was that employers would cut benefits to avoid the tax. Since then, however, public opinion has shifted decisively, as premiums and out-of-pocket costs for patients have skyrocketed. So now, the biggest health issue is not how much the country is spending on health care, but how much individuals are. 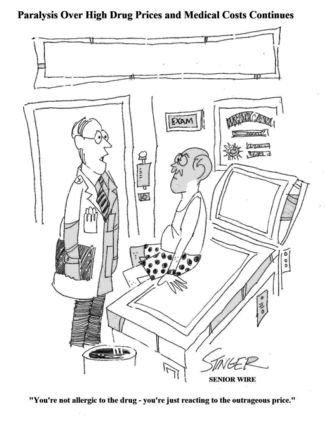 Since its passage, the Affordable Care Act has been the subject of multiple court cases and more than 60 attempts to derail it in Congress. It continues to be to be a political football in the courts. Hanging in the balance is not only health coverage for the roughly 20 million Americans who are directly served by the ACA, but also hundreds of millions whose health care and coverage have been affected by the thousands of changes that the ACA made to law. These include nearly every senior in the United States because among the provisions that were changed include Medicare drug co-payments, and protections for people with preexisting conditions.

Also contributing to this column were The Washington Post, Politico, Kaiser Health News, The Hill, and CBS News.