COVID-19 realities: Those here now and those likely coming soon 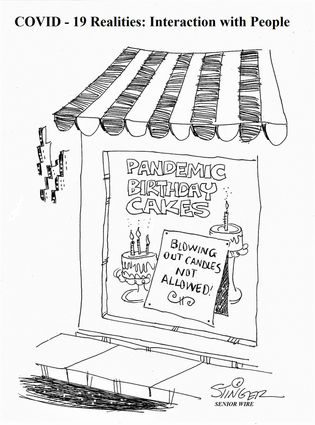 As the nation moves into whatever "reopening" the next phase of the COVID-19 challenge means, the pandemic's mark on American health will be a permanent one in good ways and unfortunate ones too.

The nation is nowhere close to a vaccine or a cure despite president Donald Trump's hyper-ambitious "plan" to develop, manufacture and distribute a vaccine by the end of 2020. Most scientists suggested that the most "optimistic" potential for a vaccine would be at the end of 2021 and more likely it could be 2023 before it would be available to the 340 million Americans.

The pandemic has left vulnerable hospitals in the red, totally without reserves and resources, and has done the same to most nursing homes and assisted living facilities. Patients are adjusting to health care from the distance of their homes and lawmakers on Capitol Hill and at the White House are desperately trying to patch holes in America's safety net.

Now add in other variables like the knee-on-the neck death of George Floyd and acknowledge that the 2020 presidential elections are less than 150 days away in November, and you've set the scene as the nation struggles to regain its footing.

But out of that chaos, some significant trends are emerging that will shake up the health care agenda moving forward. The most obvious changes are to the future of nursing homes and assisted living, where roughly one third of all the COVID-19 deaths occurred. Wholesale changes are inevitable and a work in progress.

Telemedicine is also likely changing the way people deal with their doctors, avoiding long lines in waiting rooms for things that can be resolved via videochat or telephone conversation. What remains to be seen is whether the Trump administration or Congress will make permanent the Medicare reimbursement changes that make it worth a doctor's time to chat.

Health care for seniors will be different as the country emerges from COVID-19. Here are at least six areas where there is a new reality and some bold predictions about where things are going.

All medical facilities and how they do work will never be the same after the pandemic. Many hospitals will probably close and a lot of primary care doctors may never be able to recover their practices, especially solo practitioners.

Private, public and both urban and rural hospitals are all paying a heavy price to the coronavirus. Not only are they trying to keep their patients and doctors healthy despite a continued shortage of supplies, but widespread cancellations and postponements of elective surgeries have crippled many facilities' bottom lines.

For decades, these procedures – from hip surgeries to cancer treatments and heart surgeries – account for much of a hospital's annual revenue. Without it, hospitals are laying off staff just to keep afloat. Especially hard hit are rural hospitals, which depend on outpatient services for as much as 75 percent of their annual revenue, a recent Chartis Center for Rural Health study found.

Congress funneled tens of billions of dollars temporarily to keep these hospitals afloat and elective surgeries will eventually resume, but it still will not be enough to save some of them. The most likely to succeed will be ones that are part of a system with several facilities, or that join other groups.

Primary care has also taken a massive, if less-noticed hit during the pandemic as patients are no longer going in for routine check-ups and doctors aren't seeing anywhere close to the normal income they get from performing surgeries. Many practices will shutter and some will get bought out by insurance companies. Independent primary care doctors and specialists are most likely to suffer.

Drug prices and the need for research

Funny thing about political pressure when the country desperately needs a vaccine to fight an epidemic like coronavirus – while the political rhetoric will remain a mainstay in the fall campaign, drug company pressure to lower drug prices is no longer as important a priority. COVID-19 flipped the script. Instead the focus is keeping considerable public pressure on drug companies to develop at breakneck speed treatments or a vaccine.

That means there is also an unusual opportunity for the much-loathed drug companies to rebrand themselves as heroes. The pharmaceutical industry could dramatically rehabilitate its severely damaged reputation, by developing a vaccine and making it available at a reasonable cost or free to everyone. OK, so this is a huge ask, but will it be hard to criticize the drug industry and especially the need for research and development if a vaccine ultimately emerges?

Democratic lawmakers on Capitol Hill are pushing the government to finally exercise negotiating power over drug prices in advance of finding a coronavirus "solution." But that may stay in the rhetorical realm during the campaign without actual solutions emerging. However, one more huge change is that with at least 40 million Americans newly out of work, high drug prices could pose a much bigger barrier to care than ever.

A push to expand health coverage

With the country in economic free fall/recovery mode (however you want to categorize it based on your political views), unemployment at record levels and tens of millions of people without health coverage or on the verge of losing it, the ongoing question remains: How is the richest country in the world unable to financially protect its population in a medical emergency?

Where that leads – to a government-run public option, as outlined by likely Democratic presidential nominee Joe Biden, or a Medicare for All option as the progressive Democrats have pushed for, or maintaining the status quo and letting the private sector fix things, as the Trump administration seems to endorse – the issue is likely to only be solved after the November elections.

Congress has passed targeted fixes to cover COVID-19 testing and treatment for uninsured Americans and some health insurers have waived cost-sharing for customers during the pandemic. But that opens yet another complicated policy question: If these costs can be waived for a viral outbreak like this one, why couldn't they be also waived for people with heart disease or cancer? That too won't get resolved until after a president is elected.

One other clear trend is emerging – a push away from traditional employer-based health insurance. In bad economic times, employers will be under more pressure than ever to reduce costs. Conservatives see this as a change to push for health reimbursement arrangements (HRAs), in which employers reimburse employees for medical expenses and in some cases insurance premiums in place of providing insurance to employees. Progressives see it completely differently. But it's clear traditional employer-based health insurance is losing its relevance and a push for some kind of universal health coverage will continue to bubble up.

The COVID-19 virus forced states and hospitals to open their doors to outside doctors, nurses, and other medical personnel to help during the crisis. It placed immense pressure on emergency rooms and intensive care units, emphasizing the highly skilled roles of nurses, nurse practitioners and physician assistants. Many states waived long-standing state licensing requirements.

Should a second wave of the coronavirus emerge this fall as some expect, states will have to eventually get rid of, or change the way they license and regulate nurses and doctors from out of state. What should emerge are regional licensing or multiple-state licensing agreements, encouraging greater flexibility for medical personnel. It should also lead to increased responsibilities (and perhaps pay) for nurses, physician assistants and other medical providers.

This will be especially prominent at senior care facilities like nursing homes and assisted living facilities and in rural areas, which were especially shorthanded. Family doctors are becoming rare, and with many rural hospitals in bad shape financially, some workable solution will emerge to fix this problem if Congress, state legislators and state medical boards, which all have a wide range of powers over scope-of-practice rules allow them to. It wouldn't be surprising if there's also a push for a retired doctors corps – think a Peace Corps style for emergency situations.

Make it in America again

The severe shortages of personal protective equipment masks, gloves, gowns, and ventilators in most medical facilities, will prompt a serious reassessment of where and how that equipment gets to medical facilities. It will certainly prompt changes to the current supply chains with a lesser dependence on China and a push to make these products, as well as drugs, here in the United States. In addition, changes to medical deliveries are inevitable, especially in rural areas, as some companies are exploring usage of drones in rural areas to deliver packages like medicines.

These are not new ideas. Back in the 1990s, then Clinton administration health secretary Donna Shalala was so worried about a flu epidemic and that shots were not being made in the U.S., that she moved production and awarded a huge contract to a Pennsylvania company.

This time, wholesale changes might come in the form of a jobs bill, or a stimulus package, but watch for the likely ramp-up of manufacturing facilities – an effort both political parties can support under the right conditions. Already, bipartisan legislation advocating less dependence on foreign nations (specifically China and India) in pharmaceutical manufacturing capacity has been introduced by a very unlikely pair of Senators, conservative Republican Marsha Blackburn, R-Tenn., and moderate Democrat Bob Menendez, D-N.J.

Other trends to pay attention to

In addition to all the serious policy changes, there are a lot of other things changing as people gingerly step back into the workplace and re-examine how they interact with people.

Just a few ideas to consider:

Work from home is here to stay, for those who can do it. It will dramatically change the real estate industry and how offices are organized going forward.

The end of the buffet line. You can kiss those salad bars goodbye and with them, Costco and Trader Joe store samples, and also touching fruit to find the freshest piece or ripest avocado at the grocery store.

Temporarily forget concerts and music festivals, huge sports events, movie theaters and even political rallies. These will all have to be revamped somehow, but professional football will likely be the biggest test in the fall.

Religious activities are also going to be changed forever: forget shared spoon communion, shared drinking from a communal chalice, and even fundraising plates will have to be rethought.

Blowing out birthday candles might need to be reconsidered as well as the sharing of microphones at karaoke bars.

Thankfully, some of this revamped progress may have an upside; at least one good thing can emerge from this pandemic crisis – finally the world can say goodbye to shared bowling shoes.

Also contributing to this column were Vox, Stat, Forbes and the Newport (RI) Daily News.