Where the two presidential candidates stand on senior issues 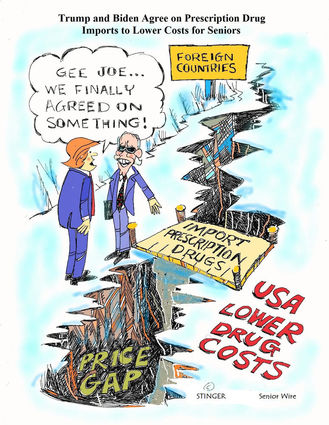 Major-party presidential candidates Trump and Biden have dramatically different visions for the future on health care issues. So in assessing their policy positions, it's also important to look at actions versus talk. Trump has been president for almost four years; Biden had eight years as vice president under Barack Obama, and before that 36 years in the U.S. Senate. So both have actual records with which we can look at what they've tried to do, versus what they say they plan to do.

Here's a breakdown on the key issues:

Give Trump points for consistency on one front – he has been unrelenting in his determination to undo what his predecessor, Barack Obama, did. Failing to legislatively turn around the Affordable Care Act (Obamacare) in Congress, Trump has turned to other tools to undermine the sweeping ACA health care law. He has tried repeatedly to gut the law and eliminate parts of it, both with executive actions and through the courts.

Trump's Justice Department is backing a lawsuit brought by several Republican-led states seeking to overturn the entire ACA law, which the U.S. Supreme Court is expected to hear sometime this fall. Trump gets credit for a Republican-congressionally backed 2017 tax bill, eliminating the ACA's individual mandate, which required most people to maintain insurance or face a penalty. To date, that is the administration's single biggest achievement on health care policy, despite that it did result in increased premiums.

Trump has used his executive power to boost so-called "skinny" short-term plans, which are exempt from the ACA's requirement to cover essential benefits like prescription drugs, and guarantee coverage for people with pre-existing conditions. Trump has suggested this is a great success because these plans are typically cheaper than Obamacare coverage, but Democrats deride them as "junk" health plans because they don't provide the same level of benefits or consumer protections.

These plans had been offered as temporary ones, for up to three months under Obama.

Trump has increased that period to three years, a move opposed by many patient advocates, hospital groups and health insurers.

Under the ACA, insurance companies cannot discriminate against people with pre-existing medical conditions. which directly affects about 130 million Americans – including 64 million seniors. If a president could simply issue an executive order to bypass Congress and enact his own historic health care law, Trump would have done that – and so would have Obama – instead of fighting for years to get the ACA passed or repealed. If Trump is able to persuade the Supreme Court next year to overturn the Obamacare law, it's unclear what if any protection an executive order would offer in place of the law.

Unlike many of his Democratic rivals for the presidential nomination, Biden never endorsed nor supported the single-payer plan of 'Medicare for All' that Sen. Bernie Sanders, I-Vt.

and Sen. Elizabeth Warren, D-Mass., advocated for. Instead, he vowed to strengthen the Obamacare law, which passed during his first term as Obama's vice president.

Biden's plan calls for a Medicare-like public option to compete alongside private insurance markets for working-age Americans, while also increasing premium subsidies that many working class and middle class workers use already under the ACA. The public option would be available for small businesses and individuals who do not have, cannot afford or do not like their employer-based coverage. That positions Biden between Trump, who wants to scrap the 2010 law altogether and is pursuing that in the courts, and more progressive Democrats who want a single-payer system to replace private insurance altogether.

Biden sees his approach as the next step toward universal coverage and one that can actually get approved by Congress. His plan would also open up the Affordable Care Act to the millions of people who are uninsured because they live in one of the 13 states that have refused to expand Medicaid. Under Biden's proposal, they would automatically be enrolled in the public option.

Biden would also lower the age to opt into Medicare from 65 to 60. Medicare would be

free to negotiate prices with drug companies and makers of Medicare-covered drugs wouldn't be allowed to raise prices by more than inflation. He has also proposed expanding the subsidies available on the ACA marketplaces. To pay for this $750 billion plan over 10 years, Biden proposes increasing taxes on the wealthy.

Drug prices have been a big focus of President Trump's rhetoric. He regularly uses his bully pulpit to wish changes, staging elaborate events including White House Rose Garden ceremonies to pronounce successes and victories that have lots of glitz but little substance. To his credit, he has kept the issue visible.

In August, he once again staged a signing event for four executive orders aimed at lowering drug prices, seeking to take action on a key issue for voters in an election year. This time, his plan would allow states to develop plans to import cheaper drugs from Canada, eliminate a system of drug discounts known as rebates in a bid to simplify the system, and seek to make EpiPens and insulin more affordable for some patients of certain health providers. He also announced a fourth, more sweeping order, seeking to slash the price that Medicare pays for drugs to be in line with prices paid in other countries.

These are all ideas he had previously floated, but not succeeded in getting into law. He proposed to base the price of some Medicare drugs on the costs in foreign countries, where drugs tend to be cheaper. But that effort stalled and died in 2019. So bringing it back again is just more talk. The insulin and EpiPen ideas are limited to a small segment of the eligible population. In addition, in order to actually put an executive order in place, extensive rules changes must be made, and that procedure takes months. Trump has also completely abandoned a proposal to require drug companies to disclose list prices in television advertising, which was blocked in a federal court.

Biden supports a bill approved by the Democratic-led House of Representatives last year that would allow Medicare to negotiate drug prices the way private insurers do. Allowing Medicare to do that, which is currently prohibited by law, would let the federal government save billions of dollars using its clout representing all seniors, to lower drug prices. Republicans, with the support of the pharmaceutical industry, have argued that would force drug makers to spend less money on research and development. The Trump administration has vowed to veto the House bill, if it ever gets Senate approval. But it can't get the votes to even get a debate in the Senate.

There is one area where Trump and Biden agree: both favor some form of importing prescription drugs from foreign countries to lower costs. Presidents as far back as Bill Clinton in the early 1990s supported this idea – but safety concerns, questions about counterfeit drugs and the powerful drug lobby's objections have stopped this proposal in both Democratic and Republican administrations for more than 25 years.

Biden has proposed lowering the Medicare eligibility age from 65 to 60, a move that would potentially extend Medicare to some 20 million more Americans.

Trump has proposed several budgets that include cuts to both Medicare and Medicaid spending. While those Medicare reductions would not affect benefits directly, they would change how doctors and medical providers get paid. The Trump administration has also supported imposing work requirement and other limitations on Medicaid, the joint federal-state program for the poor, and installing caps on Medicaid spending growth. He has also supported converting Medicaid to block grants, moves that would result in fewer people covered.

What neither Biden nor Trump have adequately addressed is the impending insolvency of the Medicare Trust Fund, which is projected to run out of money in 2026 –- and that was before the COVID-19 issue cratered the nation's economy.

Senior care - an increasingly important topic that is too often overlooked on the campaign trail - is back in the spotlight because of a proposal by Biden. The former vice president is focusing on supporting a professional long-term care workforce serving seniors in nursing homes, assisted living facilities and in their own homes, as well as assisting family caregivers.

Biden's plan also calls for improving the pay and benefits of home health care aides and personal care assistants, who usually earn minimum wage with no benefits. It calls for a national minimum wage of $15 an hour for caregivers as well as 12 weeks of federally-paid medical and family leave.

About 40 million unpaid family caregivers would also get help with an annual tax credit of up to $5,000 to reimburse expenses. The plan would additionally help seniors buy long-term care insurance with tax breaks.

As a part of his economic agenda, Biden has a sweeping 10-year plan that seeks to dramatically change the way older adults are cared for in the United States. Specifically, the former vice president's proposal calls for a $775 billion overhaul of the nation's caregiving infrastructure, which is largely made up of women and people of color.

His plan also looks to provide for the estimated 800,000 people waiting for home and community services under Medicaid. He wants to expand alternatives to institutional care for all older Americans while helping veterans by filling tens of thousands of vacancies at Veterans

Affairs facilities around the country. And he's pledging to train and hire 150,000 new community health workers in underserved communities and 35,000 more to combat the opioid crisis besides creating a 100,000-member public health job corps. He ties all of these types of care, plus child care as well, into one package.

Where Biden's plan falls short, however, is not adequately addressing universal long term care coverage. It doesn't include much to benefit middle-income recipients of long term care and their families who are not poor enough for Medicaid but don't have enough to purchase assistance on their own.

Also contributing to this story were: The Washington Post, Politico, VOX, the New York Times, Kaiser Health News and Reuters and the AP.