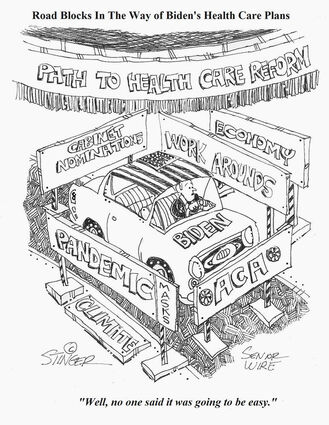 President-elect Joe Biden will not get a traditional honeymoon from Congressional lawmakers to start off his new administration in January. It will severely limit what he can accomplish on his ambitious health care agenda.

With sharp divides in both houses of Congress, where a few votes one way or the other could determine success or failure, Biden may even have trouble getting his Cabinet nominations through. Without a doubt, Biden's two-prong agenda – to solve the coronavirus pandemic and patch up holes in the Affordable Care Act's infrastructure – will face barriers and stumbling blocks, instead of consensus.

Biden portrays himself as a seasoned hand at bipartisanship from his eight years as President Barack Obama's vice president, and 36 years as a U.S. senator, where he was able to forge many compromises with members of the opposing party. One lesson he learned along the way was that you must pursue the art of the possible, rather than shoot for lofty visionary goals.

Biden's initial focus and attention will be whipping the federal government's COVID-19 response into shape. Biden has repeatedly said he pledges to "spare no effort, or commitment, to turn this pandemic around."

This is particularly important to seniors – who have suffered the most – with more than 100,000 deaths of long-term care facility residents and staff, as of the end of November, according to a Kaiser Family Foundation study. That's almost a third of the nearly 300,000 COVID-19 related deaths in the United States.

Adequate testing and clear information will be the first major contrast with the Trump administration. Biden intends to empower the scientists at the Centers for Disease Control and Prevention to help set national, evidence-based guidance to stop outbreaks as well as making significant financial investments and developing a detailed, well-organized plan for vaccine distribution, testing and the creation of a public health workforce to carry out contact tracing and other services.

Biden introduced his health care team in December, and those choices point to a much stronger federal role in the COVID-19 strategy, restoring an emphasis on science and on equitable distribution of vaccines and treatments among racial and ethnic minorities, who have suffered a disproportionately high toll of coronavirus deaths.

The emphasis will be a more assertive federal role. Under Trump, states were often left to figure things out themselves, like when states were called on to test nursing home residents without providing an infrastructure, only to rectify that omission later. Biden said he will urge the public to wear masks and social distance and he plans to ask the American public to actively mask for the first 100 days. He also pledged to use his executive authority to require mask usage on all federal government properties.

Before the election, Biden made clear what his top priorities would be – getting the COVID-19 pandemic under control, followed by economic recovery, racial equity and climate change. Other health care issues were not included among his four main priorities; most other health care related legislation will likely be delayed or deferred, like shoring up the Affordable Care Act, unless in a pending case the Supreme Court finds the ACA law unconstitutional, leaving millions of Americans without health insurance coverage.

While selecting his Cabinet nominees, and working through policy ideas, Biden has started to detail some of his ideas for fighting Covid-19, focusing on six key areas.

1. Setting shared guidance for slowing community spread. Biden will direct the CDC to provide specific guidance, based on the degree of viral spread in a community, for how to open schools and reopen businesses and when to impose additional restrictions and even stay-at-home orders. Under the Trump administration, this had been left solely to states and local governments to figure out. Biden also wants to create a national "pandemic dashboard" to share this information with the public.

2. Ramp up testing. Biden has set the goal of ensuring that all Americans have access to regular, reliable and free testing, something the Trump administration left completely to state and local governments to figure out. The Biden administration also wants to double the number of drive-through testing sites and will invest in "next-generation testing" – things like home tests and instant tests. Several home-test kits that give quick results without being sent to a laboratory are in development, but so far, none have been approved by the Food and Drug Administration. The new administration is expected to expedite that.

3. Hiring public health workers. The Biden team pledges to "mobilize" 100,000 Americans to work with local organizations around the nation to perform contact tracing and other health services for populations at high risk for COVID-19. The idea is to empower local communities and health departments to assist people with challenges related to the pandemic like food insecurity and affordable housing in addition to health issues. This will also be a key part of the way to reopen communities and will also be an economic jobs boom for the nation.

4. Pandemic health insurance. Millions of Americans have lost health insurance during the pandemic. The Biden administration wants to have the federal government cover 100 percent of the costs of COBRA coverage for the duration of the crisis. Under the COBRA law, people who lose their employer-based health insurance can stay on that insurance. Biden also wants to expand coverage by making more people eligible for premium subsidies under the ACA. During the pandemic, several governors asked the Trump administration to reopen the federal Obamacare marketplace for a special enrollment period. Biden plans to do that immediately after his inauguration to allow those who have lost insurance to sign up for new plans – a step President Trump would not do.

5. Caregiver workforce. Families are struggling to find affordable care for their children, aging relatives or loved ones with disabilities during the pandemic. At the same time, professional caregivers have either lost their jobs or continue to work at low paying caregiver jobs, often putting themselves at risk of COVID-19 exposure. Biden plans to work with states to speed up waiting lists for Medicaid-paid care in homes.

He also has outlined a detailed plan greatly expanding caregiving, including ensuring access to preschool for 3- and 4-year olds and supporting caregivers through job training and improved benefits and protections. Congress will have to help, and true bipartisan cooperation will be needed to adequately address these concerns.

6. Boost vaccine distribution and PPE. States desperately need money to distribute a vaccine and to make sure that it gets to everyone who wants it. Congress has been tied up in partisan knots trying to work out any kind of consensus on anything COVID-19 related since last spring. The Biden administration plans to ask Congress to invest billions of dollars in a vaccine distribution plan that guarantees that every American gets access to the vaccines cost free. Biden also wants the federal government to solve the shortages of Personal Protective Equipment (PPE) that have plagued the health care system since the beginning of the pandemic.

The biggest change will be federal coordination rather than the Trump administration's approach to let the states, and cities fend for themselves. While they used the Defense Production Act to fix the lack of ventilators at hospitals, Biden has indicated he will use that law to fix the production of masks, face shields and other personal protective equipment so that supply outpaces demand.

During the campaign, Biden campaigned on offering a "public option," a government-run program offered alongside the private health plans sold through the ACA's insurance marketplaces for people who cannot get affordable coverage through their jobs. But creating a new form of coverage – further broadening the federal government's role in insurance – is even more daunting given the partisan political divide and especially with strong opposition from the health care industry. To make this happen Biden will need bipartisan cooperation in both the House and Senate, and that will be difficult to achieve.

He wants to broaden and fix issues with the Obamacare law by expanding federal subsidies for health plans to specifically help more middle-class families. Medicare currently enrolls more than 60 million Americans, including retirees and people with disabilities. Biden wants to lower from 65 to 60 the age at which people could join Medicare, an idea Democrats have considered for years to help an age group in which unemployment runs high and insurance premiums tend to be expensive. That would add 23 million people to Medicare, according to Avalere Health, a consulting firm.

Again, Biden will face obstacles, including the powerful hospital industry, to get this into law. Hospitals fear adding millions of people to Medicare will cost them billions of dollars in revenue.

One area the new president can expect to succeed will be in reversing many of the Trump administration's initiatives. Using executive and administrative authority, Biden plans to undo waivers that let states change the way they implement the law. He also wants to curb access to short term health plans that do not contain all the essential benefits the law requires, like prescription drug coverage, preventive medical services, mental health services and pregnancy and childbirth, among others.

Biden is also likely to end a Trump administration push to let states shift the way they pay for Medicaid from open-ended federal funding to a block grant, and use his authority to reverse deep funding cuts to enrollment outreach efforts.

The wild card is the new 6-3 conservative majority on the U.S. Supreme Court, which heard oral arguments November 10 on a lawsuit from GOP-led states claiming the ACA is no longer valid because Congress zeroed out its penalty on people who don't have health insurance. The Justices are expected to make a decision before June.

Invalidating the ACA would bring major upheaval to the entire U.S. health care system. It would mean 20 million people would instantly lose their coverage if the law ends. But it would also affect the 130 million Americans that have pre-existing medical conditions.

Biden is also likely to try to work around Congress to get some of his agenda enacted. He could use emergency powers to temporarily boost subsidies to help families afford marketplace plans under the ACA. Biden could, by executive order, reopen ACA enrollment and restore the federal funding to help families sign up for coverage that President Trump slashed. He could also rescind Trump's restrictions on access to birth control and eliminate the "public charge" rule that deterred immigrants from accessing benefits.

He could also ease access to Medicaid and use federal dollars to incentivize the 12 states that have not yet expanded Medicaid to do so, a move that might be welcomed even by conservative anti-Obamacare governors, because states are facing such huge budget shortfalls.

Democrats might also focus on issues with bipartisan appeal like lowering prescription drug prices or outlawing the practice of "surprise" medical billing, when patients are unexpectedly charged for out-of-network care. These measures have broad bipartisan consensus for action, if details of what those actions are, can be ironed out.

Also contributing to this story were: NPR, the Washington Post, AP, the Wall Street Journal and Time.