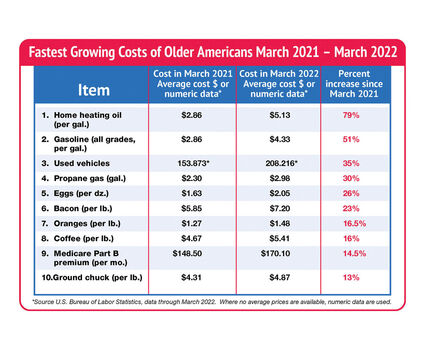 High inflation has caused Social Security benefits to lose 40% of their buying power since the year 2000, according to the latest update of an ongoing study by The Senior Citizens League (TSCL), a Washington D.C.-based senior advocacy organization.

Based on the most recent consumer price data released in mid-May, the annual cost of living adjustment (COLA) for 2023 could be around 8.6%, Johnson estimates.

Social Security purchasing power tracked by this study plummeted by 10 full percentage points, from a 30% loss of buying power in March of 2021 to 40% in March 2022 - the largest such drop ever recorded by Johnson's study. The study compares the growth in the Social Security COLA adjustments with increases in the price of 37 goods and services typically used by retirees. While prices rose in almost every spending category, benefits were most-impacted by sharp increases in energy costs for home heating, gasoline, and higher food prices, and a steep 14.5% increase in Medicare Part B premiums in January of this year.

This study examined expenditures that are typical for people ages 65 and up, comparing the growth in the prices of these goods and services to the growth in the annual COLAs. It includes cost increases in Medicare premiums and out–of–pocket health care costs that are not tracked under the index currently used to calculate the COLA.

The study found that since 2000, COLAs have increased Social Security benefits by a total of 64%, yet typical senior expenses through March 2022 grew by more than double that rate - 130%. The average Social Security benefit in 2000 was $816 per month. That benefit grew to $1,336.90 by 2022 due to COLA increases. Because retiree costs are rising so much faster than the COLA, this study found that a Social Security benefit of $1,876.70 per month or $539.80 per month more than currently paid would be required just to maintain the same level of buying power as in 2000. The table illustrates the top ten of fastest-growing costs for older consumers from March 2021 to March 2022.

"Retirees know all too well that, Social Security benefits don't buy as much today, as when they first retired," Johnson notes. To put it in context, for every $100 of goods or services that retirees bought in 2000, today they would only be able to buy $60 worth," Johnson says.

To help protect the buying power of benefits, The Senior Citizens League supports legislation that strengthens and protects the annual cost of living adjustment and Social Security benefits

To learn more about these initiatives, visit http://www.SeniorsLeague.org.